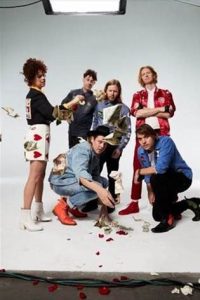 “Money + Love” opens in the aftermath of Arcade Fire’s 360-degree deal with global media and e-commerce platform Everything Now, and features a narrative that unfolds over the course of full performances of “Put Your Money on Me” and “We Don’t Deserve Love” from the GRAMMY-nominated global #1 album Everything Now (Sonovox/Columbia).

Win Butler commented on the ambitious scope of the two-song short film, “The concept of a double video really appealed to us, we’d always loved songs being put together as A and B sides… and these songs seemed perfect together. David has been a great collaborator for us since Reflektor and we were finally able to work with Toni whom we’d been wanting to work with for some time”.

Director/co-writer David Wilson added, “The ambition and scale of the piece was huge from the outset. I adore working with Arcade Fire – reacting to their vision and scale is a beautiful thing to creatively respond to. The belief and trust in me from the band made this one of the best experiences of my career. It’s an as-close-to-perfect collaboration that I can think of with me and Win hitting emails backwards and forwards continually over the formation of the script. The connection, communication and enthusiasm from the band on the multiple shoot days led to an extremely tight bond. I’m super excited for this to be out in the world.”

Toni Collette said of her role,  “Arcade Fire is one of my all-time favourite bands. I was blown away when they asked me to be part of their video. It was a total pleasure acting with them and an even greater pleasure getting to know them. They continue to inspire and I continue to admire. I mean, who gets to do that? I am so lucky!”

Arcade Fire played a surprise live set at a “Money + Love” premiere event last night at New York City’s Gramercy Theatre. The premiere featured a debut screening of “Money + Love” preceded by a conversation between Spike Jonze and Arcade Fire and followed by a surprise Arcade Fire concert for an rapturous crowd of 600 ecstatic fans. The most intimate NYC Arcade Fire show in years, the show’s setlist featured such rarely played songs as “Headlights Look Like Diamonds” from the band’s self-titled EP and “Antichrist Television Blues” from Neon Bible.

Arcade Fire’s New York trip will continue through this weekend, with a March 17 appearance on SaturdayNight Live with host Bill Hader.

They stop in Vancouver, BC on March 25th for a performance at the 2018 JUNO Awards, where they are nominated for 4 awards, including ‘Album of the Year’.

Arcade Fire has also confirmed the kick-off of the Everything Now Continued tour, with six new U.S. headline shows, the band’s first confirmed non-festival headline appearances in the U.S. in 2018:

Tickets to the new shows will be on sale to the public beginning Tuesday, March 20

For further information, go to arcadefire.com.