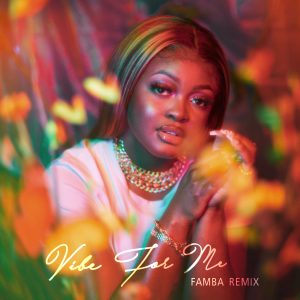 [Toronto, ON – October 5,2021] Ontario native Aqyila and Nova Scotia native Famba have teamed up to release a remix of Aqyila’s viral TikTok hit “Vibe For Me.” Famba’s production, fused with Aqyila’s impressive range, is guaranteed to get listeners vibing, raising the BPM of the original and combining soulful, sunny synths and a tropical drumbeat. Listen to the remix HERE.

‘’I loved what Aqyila did with the original” says DJ and producer Famba. “It’s such a fun track that I wanted to take that energy and put my own spin on it. I got a chance to experiment with analog sounds and retro drum machines and really turn it into a dance song. It was such a great song to remix!”

The original fan favourite delivers a powerful message of positivity, inclusivity, female-empowerment, and self-love. It has grossed nearly five million TikTok video creates and over 10 million worldwide streams and vaulted into the Top 100 of the TikTok All Time Top Tracks chart. “Vibe For Me” has garnered traction globally in Brazil, the Philippines, New Zealand and beyond, and Aqyila has received praise from Sidedoor Magazine, RANGE Magazine, Also Cool Mag, CLOUTCLOUTCLOUT and more.

The Famba remix is the next look for Aqyila this autumn, serving up a new “Vibe for Me” flavour for fans while she works on new music. Stay tuned for more news from Aqyila!

More about Aqyila:As a vocalist and songwriter, Aqyila leans on her instincts, first and foremost. Harmonies drip like honey without effort, while her dazzling vocal runs explode straight from the heart. Twisting and turning with ease, her voice naturally wraps around guitar-laced and beat-driven production drenched in soul with a touch of island flavor. She unassumingly breaks the boundaries between genres and borders. Aqyila continues to elicit an innate emotional connection with audiences worldwide, charting on Spotify across four continents and generating tens of millions of views and streams.

Born of Jamaican descent in Toronto, Canada, music surrounded Aqyila throughout her childhood and adolescence. The voices of gospel titans Kirk Franklin, Donnie McClurkin, and Fred Hammond piped through her home just as loudly as R&B favorites like Dru Hill, Tyrese, Ginuwine, and Tamia. Her father even used to DJ back in Jamaica, sharing this passion for music with the family. Simultaneously, she obsessed over Nat King Cole and Whitney Houston before eventually discovering the likes of Jazmine Sullivan, Ari Lennox and Sabrina Claudio.

Prior to her viral success on TikTok, Aqyila gained attention on her YouTube channel, where she began posting covers during her first year of high school. Her cover of Alessia Cara’s “Here, along with a Rihanna x Gyptian x PARTYNEXTDOOR mashup, received recognition directly from the artists. Aqyila has since cemented herself as an original songwriter with more of her own stories to tell.

After bursting onto the scene in 2016, Famba (Ryan Pettipas) graduated from the local music scene in his hometown Halifax, Nova Scotia to become one of the country’s biggest electronic artists. He has quickly earned a reputation for his heartfelt songs and laudable production talents via his major label original releases and widespread remixes, which have collectively garnered tens of millions of streams across multiple platforms. His first two major label releases, “Wish You Well (feat. Trove)” and “Swear to God,” each went on to achieve Gold-certified status in Canada, while his third release, “Storm (feat. Kyra Mastro),” introduced Famba to the U.S. market in a big way by scoring the #1 spot at Dance Radio (Mediabase) and logging over 13 million global streams to date. With latest tracks “Still Call You Mine” and “Games We Play” featuring two of Dance music’s blazing newcomers, Brando and MKLA, Famba is no doubt getting us excited for what’s to come later this year.