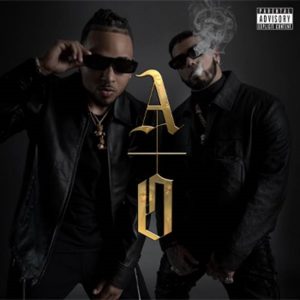 MIAMI (January 22, 2021) – Latin music fans are celebrating today with the debut of Los Dioses, the collaborative album from two Latin-music icons – Anuel AA and Ozuna. With 12 original songs, this record represents a milestone in the career of both of these Puerto Rican talents.

Get the album HERE.

Yesterday, they debuted two tracks and their respective music videos – “Los Dioses” and “Municiones,”. At midnight, with the release of the album, the superstars dropped the first official single and video for “Antes.” All music videos were filmed in Miami by director Fernando Lugo.

This powerful team-up between Anuel AA and Ozuna was eagerly anticipated by both artists’ massive fanbases. These two greats have previously enjoyed stunning success together with such collaborative chart-toppers as “Adicto,” “China,” “Cambio,” “BEBE,” “La Ocasión” and more.

The musical chemistry between both international artists is more palpable than ever on their first joint album. They rang in 2021 with social media hints about the album’s imminent release, creating great anticipation among their followers.

“I’m happy that Los Dioses is finally hitting the street,” Ozuna says. “This is an album that we had wanted to do for years, but our prior commitments had never allowed us the time. I greatly enjoyed the process and the experience of crafting this project with Anuel AA. As you all know, he’s not just a colleague to me – he’s like a brother. I also thank the team members who worked on this record, which we hope our respective fans will enjoy.”

“This album is important for both me and Ozuna. We’ve been speaking about this project since 2015 and we haven’t had time to work on the album. We both have great chemistry in the studio and our fans will be able to see the results through this album. I hope all my fans love this special project,” said Anuel AA.

Committed to creating an album that would surpass everyone’s expectations, Anuel AA and Ozuna hunkered down in Miami recording studios for long sessions in which they pushed themselves to the limit, breaking new ground in songwriting, arranging and recording the 12 songs that comprise Los Dioses. Sparing no effort, they brought in some of their favorite urban-music producers and songwriters, including: Dynell, Yazid, Tainy, Hi Music Hi Flow, Carlos Mercader, Ovy on the Drums, Lil Geniuz, DJ Luian, Mambo Kings, Jowny, Foreignteck, Súbelo Neo, Yo Poppy, and Legazzy.

Los Dioses finds Anuel AA and Ozuna elevating each other to new heights and unprecedented versatility. As artists who have made their way to the A-list of Latin music in record time, they are eager to take risks and mix their unique styles, finding a perfect balance as they continue to set trends.

The album’s musical foundation is trap, which we can appreciate as the album opens with the title track. Trap fans will also revel in “RD” and “Perfecto.” Reggaeton lovers will delight to “Antes,” “Nunca” and “Dime Tú.” Crossing into the unexpected, Anuel AA and Ozuna experiment with balladry on “Contra el Mundo,” a rap vibe on “La María” and string and wind instruments on “Municiones.”

Los Dioses is the result of an alliance between the artist’s independent labels Aura Music Corp. and Real Hasta La Muerte Inc., with distribution via Sony Music Latin.

In honor of the release of Los Dioses, the prestigious trade publication Billboard featured Anuel AA and Ozuna on the cover of its first 2021 digital edition; they make history as the first Latin artists to accomplish this feat. 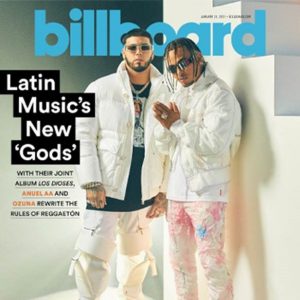 About Anuel AA:
Anuel is internationally recognized for being the Spanish Trap pioneer. He jumped into the artistic world thanks to the success of the song “La Ocasión”. At the highest point of his career at the time, the singer was put in jail and served a 30-month sentence in Puerto Rico.

On the same day of his jail- release in July 2018, Anuel released his album Real Hasta La Muerte, receiving extraordinary support from his fans worldwide. The album peaked on the first places in music charts all over the digital platforms.  In 2018, Anuel was crowned as the most viewed artist on YouTube globally for more than 26 consecutive weeks.  He obtained his first nomination for Premio Lo Nuestro 2019 as Best New Artist and won.

Anuel has made successful tours in the United States, Latin America and Europe, with “Sold Outs” in all cities.  Additionally, he was among: The 50 best Latin albums of the decade with Real Hasta La Muerte.

His awards and nominations include Premio Lo Nuestro, Premios Juventud, Premios Tu Música Urbano, Premios Billboard and finally, Latin Grammy.  The latter came with the release of his most recent studio album Emmanuel. Anuel was recognized by the Spanish Music highest authority in 7 different categories, plus the possibility of fulfilling his most precious childhood dream: singing on the stage of the biggest music idols. Starting the 2021 Anuel received 7 nominations for the Premio Lo Nuestro 2021 gala.

About Ozuna:
The multi-award winning Puerto Rican singer and songwriter OZUNA is one of Latin music’s most iconic and listened-to artists around the world. Since launching his career in 2015, Ozuna has won countless accolades, including making Time Magazine’s Most Influential People list (2019), and winning BMI’s Contemporary Latin Songwriter of the Year (2019) and Contemporary Latin Song of the Year “Taki Taki” (2020). He also holds four Guinness World Records™.

Ozuna continued breaking barriers and making history throughout 2020. He was one of the 10 most streamed male artists – in any genre – on Spotify, as well as one of the top 10 worldwide artists on YouTube. Billboard named “Caramelo Remix” among its 25 best Latin songs of the year and one of the 100 best overall songs. He won his first two Latin GRAMMYs® in November. In September, ENOC became his fourth consecutive album to debut at #1 on the Billboard Top Latin Albums chart. He was the most-nominated artist at the Billboard Latin Music Awards, and tied for the top winner at Premios Tu Música Urbano. In February, he was awarded the Silver and Gold Seagull awards at the prestigious Viña del Mar International Song Festival in Chile. He charges into 2021 as one of the most-nominated artists at the Premio Lo Nuestro, while releasing the collaborative album Los Dioses with his friend and colleague Anuel AA.