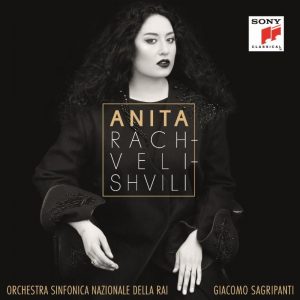 Toronto, Ontario — January 22, 2018  –  It was the sort of debut operatic dreams are made of, a once-in-a-generation sensation that launched the career of one of the most scintillating young singers now performing on the international stage. On the opening night of La Scala’s 2009 season, the 25-year-old Georgian mezzo-soprano Anita Rachvelishvili stole the headlines as Carmen opposite the superstar tenor Jonas Kaufmann. In doing so, she also became the youngest singer ever to make their debut in the role on an opening night in the legendary opera house’s history. Daniel Barenboim was the conductor, and it was he who had recognised the young singer’s extraordinary natural vocal talent and charismatic stage presence. After auditioning her initially for the minor part of Mercédès, he offered her the title role. ‘It was a huge risk for me,’ she recalls. ‘If any small detail had gone wrong, my career would have ended on the very day it began.’

‘She triumphed,’ exclaimed the New York Times, drawing attention to her ‘remarkably even voice’ and adding: ‘Whenever Ms Rachvelishvili tossed her long dark locks…smitten Spanish soldiers fell onstage like dominoes.’ The remarkable mezzo-soprano, who now releases her debut album on Sony Classical, has since sung the role over 300 times. Her natural ease on stage and powerful, seductive voice quickly led to other major role debuts such as Amneris in Aida, Azucena in Il trovatore, Dalila in Samson et Dalila. The ever-growing list of venues where she has sung includes The Metropolitan Opera, the Deutsche Oper, the Bayerische Staatsoper, the Arena di Verona and London’s Royal Opera House.

For her highly anticipated first album on Sony Classical she joins forces with the Orchestra Sinfonica Nazionale della RAI and the dynamic conductor Giacomo Sagripanti, winner of the Young Conductor prize at the 2016 International Opera Awards. The programme naturally includes two arias – the seductive ‘Habanera’ and ‘Seguidilla’ – from what has become her signature role. The selection goes on to reflect her broad dramatic and dramatic range, and personal history. It includes Lyubasha’s haunting a cappella song from Rimsky-Korsakov’s The Tsar’s Bride, an opera in which she subsequently sang under Daniel Barenboim at Berlin’s Staatsoper.

Arias from Samson et Dalila and Il trovatore showcase an artist who, as she did with Carmen, sets out with every role to return to the score and discover the three dimensional human beings behind the notes, using her natural charisma on stage and rich, powerful voice to flesh out her insights into the music. Mascagni’s Cavalleria rusticana, which she sings for the first time in Rome’s fabled Teatro dell’opera in early 2017, is represented by Santuzza’s passionate ‘Vo lo sapete’; two arias from Verdi’s Don Carlo reflect the exciting mezzo-soprano’s future plans. The album also includes Charlotte’s Letter Aria from Werther and the hauntingly noble ‘Ô ma lyre immortelle’ from Gounod’s Sapho: a favourite aria of the greatest mezzo-sopranos, which Rachvelishvili stamps with her own personality.

With a musical background deeply rooted in her native Georgia, Anita Rachvelishvili first learnt the piano from the age of six, as well as singing jazz and soul, and she still finds time, despite her top-flight international operatic career, to sing with her band. She discovered opera only aged 16 when she began singing lessons, and her extraordinary natural gift was recognised when she was accepted into the Accademia Teatro alla Scala in Milan only a few years later. It was also important, however, for her to include a piece of Georgian operatic tradition, in the form the Cavatina of Queen Tamar from the 1919 opera The Legend of Shota Rustaveli,by Dimitri Arakishvili (1873-1953). Tamar, who ruled Georgia from 1184 is 1213, is a key figure in the country’s history and ‘an example for Georgian women today,’ she explains. ‘It’s a good thing to include on my debut album, as I consider myself also a successful and strong woman – or at least I try!’