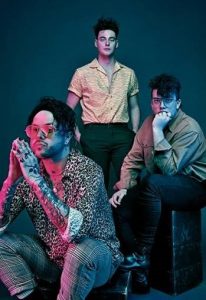 Listen to “maybe, I’m afraid” off their debut album finding it hard to smile here:

April 19, 2019 – New York, NY – Alt-pop group, lovelytheband today released the music video for their latest single, “maybe, i’m afraid,” which follows the band’s debut smash hit single, “broken” that racked up over 226 million streams worldwide and broke the Alternative Songs Chart record with 72 weeks on the chart and nine weeks at No.1. “Broken” spent 9 weeks at #1 at ALT radio in Canada. The “maybe, i’m afraid” music video tells a beautiful coming of age story about a man who spends his entire life struggling with self-acceptance.

After learning that LGBTQ Americans in 30 states can legally be fired, evicted or denied service just because of their sexuality, lovelytheband has joined forces with the “Beyond I Do” campaign for this video to help promote acceptance, empathy and understanding for the millions of Americans who can be kicked out of their homes, fired from their jobs or denied services for simply living as their authentic selves. lovelytheband believes that LBGTQ Americans shouldn’t have to be afraid that they’ll lose their homes or jobs, simply because of who they love and who they are. Visit BeyondIDo.org to learn more

lovelytheband has become an advocate for LGBTQ equality and has made it their mission to inspire change by partnering with various campaigns and non-profits throughout their current headline tour, “finding it hard to smile,” special events and online campaigns that highlight systemic inequality and provides opportunities for fans to engage.

lovelytheband solidified their place in alt music history when they broke Billboard’s Alternative Songs Longevity Record with a total of 72 weeks on the chart, nine weeks at No. 1 and over 218 million world-wide streams with their debut hit single, “broken.” They recently won a 2019 iHeartRadio Music Awards for “Best New Alt. Rock Artist” and landed two 2019 Billboard Music Award nominations for “Top Rock Artist” and “Top Rock Song.”  The band also just kicked off their North American headlining tour entitled “finding it hard to smile” with support from Flora Cash and Jagwar Twins, and they are set to play a number of upcoming festivals including Hangout Festival, BottleRock Napa Valley, Firefly Music Festival and Bunbury Festival. In addition, the trio performed on American Idol’s All-Star Duets episode, and most recently at Coachella with Dillon Francis. For more information, please visit www.lovelytheband.com