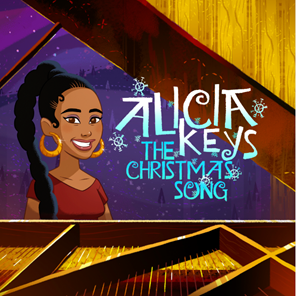 [NEW YORK, NY – December 13, 2019] — Global music icon and 15-time GRAMMY Award winner Alicia Keys celebrates the holiday season with the release of her soulful cover of the holiday classic “The Christmas Song” via RCA Records today. The joyful musical offering comes with an adorable animated video, portraying a cartoon version of Keys and her family, including husband Swizz Beatz, in a modern fairy tale-esque winter wonderland.  The video, available exclusively on Apple Music and created and produced by Bento Box Entertainment, can now be viewed here. The song is available to purchase and stream across digital platforms here.

Keys will start the new year by returning as host of the GRAMMY Awards, airing January 26 on CBS. Her book More Myself will release on March 31, 2020, and her seventh studio album ALICIA is due sometime in spring 2020.