The Single Is the Latest Offering from Keys’ New Album ALICIA, Set for a Fall Release 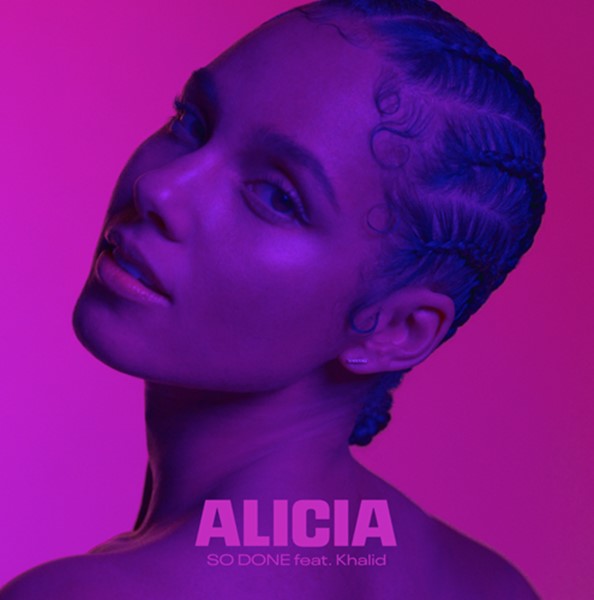 Fifteen-time Grammy winner, global superstar Alicia Keys has joined forces with GRAMMY-nominated R&B sensation Khalid for her new single “So Done.” A slow-burn R&B jam, the song sees the pair’s soulful voices crooning smoothly over a sleek guitar-driven instrumental, with lyrics about saying goodbye to any sense of false self. “So Done” was written by Keys, Khalid and GRAMMY and Academy Award Winner Ludwig Göransson, and is the latest single from Key’s forthcoming seventh studio album ALICIA, which is set to be released this fall, via RCA Records. Stream and download “So Done” HERE. Pre-order or pre-save ALICIA HERE.

“I’m so excited to share ‘So Done’ with the world. We call it a trance! The energy is inescapable! Collaborating with Khalid on this one was very special,” said Keys. “This song is about being done with changing yourself for the sake of others and letting go of any one else’s ideas of how your life should look.”

“So Done” follows Keys’ smash hit “Underdog,” which was released earlier this year from the forthcoming LP, instantly becoming the most added song at Top 40 radio. Keys performed the song, which earned both BET and MTV VMA nominations this summer, during her critically praised hosting stint at this year’s GRAMMYs ceremony. In late 2019, Keys offered the first sampling of ALICIA with “Show Me Love,” featuring Miguel. The song earned Keys a record-extending 11th number 1 on the Billboard Adult R&B Songs airplay chart. The album, which will show the many sides of Alicia at this current point in time of her life journey, is also preceded by three other masterful tracks: “Time Machine,” a supersonic four-on-the-floor anthem about the freedom that comes with letting go; “Good Job,” a powerful ballad praising unsung heroes and frontline workers, which premiered in April during a special COVID-19 global town hall on CNN; and the emotional “Perfect Way To Die,” which Keys dedicates to innocent Black lives lost due to police brutality. She gave a moving performance of the song during the BET Awards broadcast in June.

Alicia Keys is a modern-day Renaissance woman—a 15-time Grammy Award-winning artist/songwriter/musician/producer, an accomplished actress, a New York Times best-selling author, a film/ television and Broadway producer an entrepreneur and a powerful force in the world of activism. Since the release of her monumental 2001 debut album, Songs in A Minor, Keys has sold over 65 million records and built an unparalleled repertoire of hits and accomplishments.  Keys’ forthcoming seventh studio album ALICIA is slated to be released worldwide later this fall.  The first single “Show Me Love” earned Keys a record-extending 11th number 1 on the Billboard  Adult R&B Songs airplay chart, and her follow-up hit single, “Underdog,” went #1 on the overall iTunes chart and became the most added song at Top 40 radio in the US upon its release.  Keys released her new book More Myself: A Journey on March 31, 2020 via Flatiron Books, which debuted and spent multiple weeks on the New York Times Bestseller List.

About Khalid
Multi-platinum selling global superstar Khalid, who was named one of Time’s Most Influential People of 2019, has taken the world by storm since his first single, the 6x platinum “Location” (released right before his high school graduation) exploded onto the scene leading to a major label deal with Right Hand Music Group/RCA Records followed by the release of his debut album, the 3x platinum certified, American Teen. His sophomore album Free Spirit, released to critical acclaim in 2019,  was declared a New York Times “Critic’s Pick” and was called “superb” by the Associated Press. The album, which has been certified 2x platinum by the RIAA, debuted at #1 on the Billboard Top 200 and features the Grammy nominated multi-format #1 single “Talk”. Free Spirit has garnered over 5.3B worldwide streams. Khalid, who has been called a “pop prodigy” by Rolling Stone has been streamed over 16 billion times worldwide across all partners, has been nominated for 6 Grammys and has won numerous awards including multiple American Music Awards, a Billboard Music Award, a Teen Choice Award, A MTV Video Music Award and a MTV Woodie Award . Khalid has collaborated with some of music’s biggest stars including his #1 singles “Love Lies” (with Normani), “Eastside” (with Halsey and Benny Blanco) as well as hits with artists Billie Eilish, Shawn Mendes, Marshmello and more. The Mayor and Council of the City of El Paso honoured Khalid with a “Key To The City” marking September 13th, 2018 “Khalid Day.” Khalid, alongside his mother, launched The Great Khalid Foundation, which is committed to helping families by alleviating a burden of need. Khalid recently wrapped up his “Free Spirit World Tour” which took him to arenas all over the globe in 2019. Khalid kicked off 2020 by releasing his critically acclaimed track “Eleven” and his smash “Know Your Worth” with Disclosure. Khalid was recently named the youngest artist to reach 15 billion streams on Spotify alone and was just named BMI’s Songwriter of the Year (alongside Post Malone.)