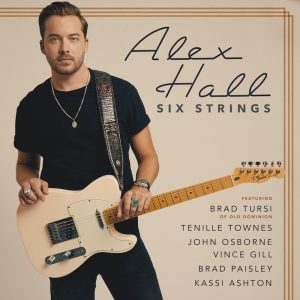 Alex Hall’s artistry is centered around his guitar playing and songwriting, which serve as the foundation to this six-track project. Co-produced by Alex, Pete Good and AJ Babcock, the EP includes featured guitarists and vocalists on each song.

After being named to Pandora’s Ones to Watch list and featured as the cover of Spotify’s “Next From Nashville” playlist, Hall has burst onto the country music scene.

Tonight, he will be joined by Tenille Townes, Kassi Ashton, and Brad Tursi for a livestream from the Bluebird Café in celebration of the EP release, and in support of Alive Hospice, as part of the Alive & The Bluebird series.

You can also catch Hall and Tenille Townes on February 16th for a Songwriter Session at the Country Music Hall of Fame and Museum HERE.

More about Alex Hall:
Originally from Gainesville, GA, Alex Hall was playing over 150 shows a year while still in high school. After moving to Nashville and signing with Monument Records, he spent 2019 opening for Tanya Tucker on her “While I’m Living Tour.” Alex had festivals across the country, including C2C, Shaky Boots, Trailblazer, Tailgate Fest, and Hometown Rising, as well as dates with Brandy Clark, booked ahead of the shutdown. His upcoming, debut EP, Six Strings, features guitar and vocals from Vince Gill, Brad Paisley, John Osborne, Tenille Townes, Kassi Ashton, and Brad Tursi (of Old Dominion), and will be out in February.

Alex is signed to Monument Records, and released his debut track, “Half Past You,” last year.