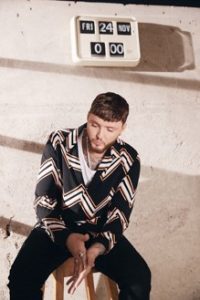 The track will be released on November 24th and comes following a remarkable 14 months for James.

Since being released in September 2016, comeback single Say You Won’t Let Go has sold more than 8.3 million copies to date worldwide and secured 1.5 billion combined streams. The single spent three weeks at No.1 in the UK and went to No.1 on US radio. In addition, James’ album Back From The Edge, released in October 2016, went straight to No.1 in the UK charts and has gone multi platinum worldwide.

In addition, the widely billed ‘comeback of the year’, James has achieved two Brit Award nominations including ‘British Single of the Year’ as well as an American Music Award nomination for Best New Artist.

James worked on the song with renowned song-writers ‪Max Martin‪, Savan Kotecha and Johan Carlsson. Speaking of Naked, James says: “The four chords that introduce the song are key, I think. Then you get the crescendo, the middle eight, the huge final chorus, but there’s no sense of overload; it stays true to the simplicity of those four chords. It’s like a hymn, that devotional aspect. The minute you hear those chords, you want to sing over them.”

The single’s gospel elements reflect a newfound passion of James’. “Gospel is something that’s become really close to my heart, I absolutely love it now. I’m not a particularly religious person but that music – man, it’s so powerful. Watching the ‪George Michael documentary, it was such a strong reminder of how he brought gospel influences into pop, and how beautiful the results can be.”

Naked coincides with James’ 11-date UK arena tour.  In December, he will then return to the studio to continue recording his third album, which is due for release next year. Working on the new album with leading lights such as ‪Ryan Tedder, ‪Justin Tranter, ‪Max Martin, James has rediscovered the passion for music that he first experienced as a child.

James spent summer 2017 on a 42-date arena tour with ‪OneRepublic which he reveals was inspiring and rejuvenating. “I’ve got such a strong relationship with my band now. We’ve been working together for more than two years and we did the OneRepublic tour over the summer, which was incredibly bonding. It was like Big Brother on a bus for two months, living in each other’s pockets, and musically, we really gelled. That’s an incredibly special feeling.”