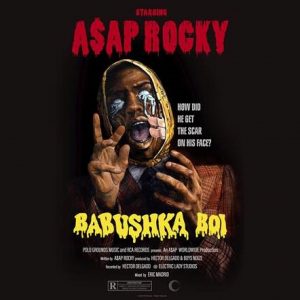 Harlem born MC A$AP Rocky, born Rakim Mayers, has taken the music and fashion worlds by storm.  In 2018, he released his highly-anticipated third studio album, TESTING, which has garnered over 1 billion streams worldwide, landing at #1 on the iTunes charts in 16 countries upon release, with “Praise The Lord” achieving platinum status.  The album has been well-received by music critics, as well, with The New York Times calling it [A$AP Rocky’s] most outré album to date, the one least concerned with prevailing trends,” Billboard saying “the Harlemite has been on the cusp of greatness for nearly a decade…his confidence and fearlessness has always been his calling card, and ‘Testing’ is more of him bravely stepping out of the box to try something new,” and Highsnobiety referring to TESTING as “an absolute triumph.”

With two critically acclaimed, #1 debuts on the Billboard 200 for previous albums, Long. Live.A$AP and At.Long.Last.A$AP and over 5.9 billion streams worldwide, TESTING launches a new era for Rocky, exploring new sounds and ideas in an unparalleled musical landscape where he continues to break the mainstream mindset with sonics rarely heard in hip-hop. Executive produced by A$AP Rocky and co-executive produced by Hector Delgado, Juicy J, Chace Johnson, and AWGE, TESTING was recorded over three years between New York, LA, London and Berlin. This album picks up where Rocky last left off, weaving mind-melting aural psychedelics into hip-hop that is, at times dark and confessional, and in other moments uplifting and celebratory. Rocky is joined on TESTING with features from Juicy J, T.I., Moby, Frank Ocean, French Montana, FKA twigs, Skepta, Kid Cudi and Kodak Black. Carrying on the legacy of the A$AP Mob co-founder A$AP Yams, Rocky and the A$AP Mob released two mixtapes, 2016’s Cozy Tapes Vol 1: Friends– and 2017’s Cozy Tapes Vol 2: Too Cozy, featuring the hit single “RAF” which has now racked up 208 million streams worldwide.

The past two years have also seen Rocky’s creative agency AWGE in the spotlight, launching partnerships with Calvin Klein, MTV, GUESS, Under Armour, Courvoisier, Dior, Mercedes Benz and JW Anderson and also launching the careers of new artists such as Playboi Carti, Smooky MarGielaa and more.