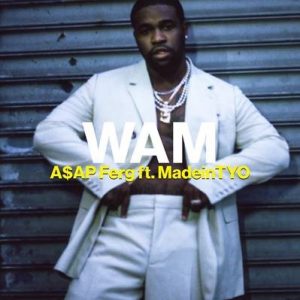 [New York, NY – July 15, 2019] Having only recently revealed the name of his upcoming project, Floor Seats, A$AP Ferg shares today another new track off the EP titled “WAM” ft. MadeinTYO. Produced by Tweek Tune, Ferg said of the track, “‘WAM’ brings back memories of summertime in Harlem and reminiscing about my accomplishments and celebrating all my wins.” “WAM” is out now via A$AP Worldwide/Polo Grounds Music/RCA Records. Buy/Stream HERE.

The recent drops mark the Harlem native’s first new music in over two years since 2017’s Still Striving, which featured the U.S. 3x/Canada 4x Platinum mega hit “Plain Jane.” The hip-hop star’s limited edition design BMX-style bike with Redline is out now and he continues to reach new heights with his collaborations with adidas, Hennessy and Tiffany & Co. With more music and projects in the works, Ferg’s plans for taking over 2019 are well on their way.

Keep Up With A$AP Ferg:

Check out the new spot from Revlon, featuring an appearance from