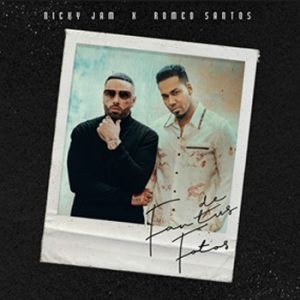 Toronto, ON – February 12, 2021 – The universe has realigned itself to unite in art two of the greatest Latin Music interpreters: the reggaeton pioneer, Nicky Jam, and the “King” of Bachata, Romeo Santos. Their new collab, Fan de Tus Fotos, is available now on all digital platforms. Watch the video here.

For the second time in their artistic careers, Nicky Jam and Romeo Santos make music together. Their first collaboration was back in 2017 with the hit, Bella y Sensual, (more than 653 million views on YouTube today) together with Daddy Yankee.

The voices of both interpreters teleport the fans to completely different universes, and therein lies the magic of this “explosive” musical collaboration. First, Romeo Santos, the international leader of Tropical music, adds sensuality and delicacy to the verses of Fan de Tus Fotos, and, on the other hand, Nicky Jam guides the entire rhythm in his voice and adds that underground feeling that transforms all of his song’s instant hits.

Fan de Tus Fotos premieres with its official music video; also available on YouTube, and it has both romance and comedy situations starring Nicky Jam and Romeo Santos. The video was filmed in the city of Miami, Florida, produced by Boy in The Castle and directed by Colin Tilley.