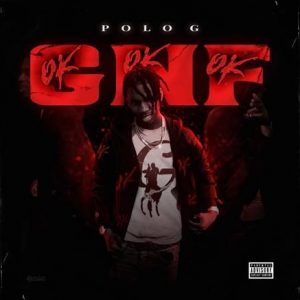 With the success of his 2020 Platinum certified album THE GOAT, Polo G today returns with the release of “GNF (OKOKOK), marking the beginning of his new musical chapter and his first song and video release of 2021. “GNF (OKOKOK) was written by Polo and produced by Swedish producers WIZARDMCE and Varohl. Polo returns to Chicago to reunite with his crew in the dark and cinematic Cole Bennett-directed music video – WATCH HERE.

Since its release in May, his critically acclaimed album THE GOAT has accrued over 3 Billion streams, 6 Gold and Platinum Music Canada certifications, has been a mainstay on the charts and landed in multiple year-end best albums lists. The album is certified Platinum by Music Canada along with his debut album, Die A Legend. Polo G was named one of XXL’s Freshman Class in 2020, an annual roundup of hip-hop’s brightest new stars. He also secured a spot on the coveted Forbes 2021 30 Under 30 list and was named a FUSE TV Future Black History Honoree for February 2021.

Polo is currently in the studio working on his new album to be released later this year.

About Polo G
Polo G has been unstoppable and is one of music’s top rising talents. Aptly named Polo G after his favorite lifestyle brand, Polo by Ralph Lauren, and his slain friend Gucci, Polo G is determined to leave his mark. The 22-year-old Chicago rapper’s critically acclaimed sophomore album The GOAT debuted at #2 on Billboard’s Top 200 chart with 10 of the songs simultaneously charting on the Hot 100. The album is certified Platinum and has accrued over 3 Billion streams to date with no signs of slowing down. His 2019 critically acclaimed Platinum debut album Die A Legend and includes the massive 6x platinum Billboard hit “Pop Out” ft. Lil Tjay. Polo G’s artistry stems from necessity. He utilizes music as an outlet to constructively verbalize the perils he and others faced in impoverished communities focusing on real-life struggles like racial inequality, violence, and mental health, while maintaining a deep connection to his community by giving back to Chicago youth with his AAU team. Polo hosted a special benefit concert All Star Weekend called “Polo G & Friends,” which was dedicated to Chicago kids fighting depression and honored the late Juice WRLD. He also performed at the Lollapalooza x Chicago Bulls collaboration and at the 13th annual Roots Picnic in support of Michelle Obama’s When We All Vote initiative. Polo made his TV performance debut on the Tonight Show With Jimmy Fallon and appeared on NPR’s Tiny Desk series. Now, Polo G launched his own label, ODA, in partnership with Columbia Records. “The name of my label is ODA, Only Dreamers Achieve Records, because in our communities we are told what we CAN’T be. I want to send the message that we control our futures and encourage artists to dream big,” stated Polo. His authentic message, coupled with the buzz he’s accumulated in a short time, positions him as one of the top artists to watch this year while he helps craft the next crop of talent to break.