LANCO’S “NEAR MRS.” OUT TODAY 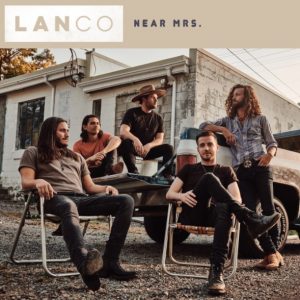 NASHVILLE, TN — Multi-Platinum group LANCO is releasing their latest track “Near Mrs.” today (Arista Nashville). Written by frontman Brandon Lancaster, Shane McAnally and Jeremy Spillman, the gentle slow-burning sway and full-circle theme is a roots-rock anthem of the big-picture wins made possible by life’s little tragedies. “Near Mrs.” is available now at all digital retailers. Listen HERE and watch the lyric video HERE.

“To take last year and turn it into something liberating…it was huge and led to a year of rediscovery for us,” Lancaster said. “Especially for me as a storyteller…it’s like, ‘Who is the guy behind ‘Greatest Love Story’ and ‘Born To Love You?’ It’s almost like you can’t move forward until you go back to tell that part of the story.”

Lancaster elaborates on the story behind “Near Mrs.” with American Songwriter HERE.

In the middle of a sold-out weekend in the Upper Midwest last March, LANCO, much like all artists, were forced off the road. But it became a much needed chance to recharge and to look around, as they weren’t who they used to be. They’d been running so hard for so long that the five-man band lost track of not just where they were going, but why they forged this musical brotherhood in the first place. As seasoned professionals, new fathers and re-dedicated friends, their skills have only sharpened – and their purpose became clear. The band pulled together country heart, classic-rock soul and the rhythmic forward momentum of modern pop, and it’s all being built for the day they return to the stage.

Steeped in the sepia-toned euphoria of small-town life, LANCO broke out with the 2x Platinum hit “Greatest Love Story,” earning a multi-week No. One. They followed up with the Billboard Country Albums chart topper HALLELUJAH NIGHTS, marking the first Country group to earn a No. One debut in a decade. Additionally LANCO garnered another Platinum hit, sending the neon romance of “Born to Love You” into Country radio’s Top 20 while sending LANCO on tour around the world. New music from the ACM “New Group of the Year” follows multiple nominations from the  CMT, CMA, ACM, AMA and iHeartAwards, while Lancaster became the first member of a group to win NSAI’s 2019 “Songwriter/Artist of the Year.” All along Lancaster, Eric Steedly, Chandler Baldwin, Jared Hampton and Tripp Howell electrify live audiences, using skilled musical chops, an adventurous spirit and expert showmanship to hard-wire connections with fans wherever they perform. For more information on LANCO visit www.lancomusic.com.