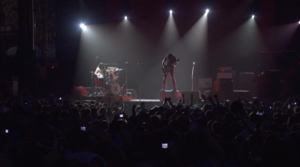 The White Stripes have shared a video of the band’s pummeling performance of “Seven Nation Army” from their legendary Bonnaroo set. The Sunday, June 17, 2007 show closed out the festival’s Which Stage, making it one of Bonnaroo’s last sets for that year.

The White Stripes Greatest Hits is available now digitally worldwide and on vinyl (2xLP black vinyl) and CD in the US, as well as on CD in Canada. Vinyl and CD for the rest of the world will be available on February 12, 2021. The first-ever official anthology of recordings from the iconic rock duo, Jack and Meg White, The White Stripes Greatest Hits highlights 26 fan-favorite and classic songs including “Seven Nation Army,” “Fell In Love With A Girl,” “Hotel Yorba,” “Dead Leaves And The Dirty Ground,” “Hello Operator,” “Icky Thump,” “Apple Blossom,” and more.

“Long live the greatest hits album… The White Stripes show the joy and the oddness of a collection of hit singles… The sequencing feels like yet another example of the band’s penchant for dualities… In between those poles is a comprehensive rundown of the band’s many feats.”
–The New Yorker

“[A] warranted and even necessary revisionism for one of the great (and misunderstood) bands of their era.”
–UPROXX

“These 26 songs are a reminder of just how potent they could be together, and that’s as compelling a reason as any to dig into their music all over again.”
–Paste (9.0)

“(The White Stripes Greatest Hits) neatly reflects the evolution of the band without ever becoming a predictable, chronologically ordered Singles Collection…the album makes space for everything, flowing neatly between vibes rather than eras.”
–CLASH (8/10)

“The breadth and depth of how much they did while still keeping it (relatively) simple is so evident. It’s almost as if we’re primed to rediscover the band all over again. Which is no small joy.”
–DIY (5/5)

“The phenomenal essence of the Stripes, as timeless and potent as ever.”
–MOJO (4/5)

“A rowdy gathering of rock, roll and everything in between… You’d be hard-pressed to imagine how two musicians could manage the feat of making music that delivered the fluidity of Jimi Hendrix, the vigour of Led Zeppelin and the compacted history of blues/country in one complete, combustible package.”
–The Irish Times (4/5)