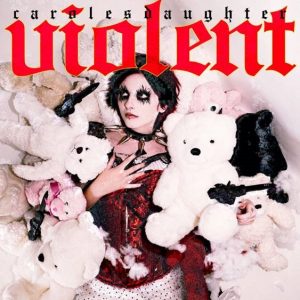 NEW YORK, NY (November 23, 2020) Alternative/pop artist carolesdaughter today releases her striking single “violent” across all platforms, along with a captivating and nostalgic lyric video that features her in a black spiked necklace, scissors in hand as she coolly cuts through an array of teddy bears. This is her first release after recently signing to Arista Records / Sony Music Entertainment.

Although officially released today, “violent” has already struck a chord. After buzzing with previous releases, “cold bathroom floor” and “my mother wants me dead,” carolesdaughter wrote “violent” over a somber beat laden with 808s and creaky acoustic guitar. She conjured up vengeful lyrics through softly sweet delivery by admitting “Now my nose is filled with powder” and warning, “Don’t make me get violent.” She uploaded it to Soundcloud, and it quickly racked up two million streams.

Of “violent,” carolesdaughter says: “I was in a toxic relationship when I wrote it. I was just fed up, and I released it. It was a real moment. I guess people recognize it.”

carolesdaughter transmutes turbulence into strangely soothing alternative pop anthems awash in lo-fi glitch, bedroom acoustics, and gutter goth elegance. Like a fairy tale heroine with facial piercings and D.I.Y. spikes affixed to her shoes, she immediately captivates without fear or filter. The 18-year-old Southern California singer, songwriter, and multi-instrumentalist, born Thea Taylor, makes an immediate connection on a series of singles and her forthcoming 2021 debut.

The youngest of ten kids born to educator parents, she grew up south of Los Angeles and just north of San Diego in Oceanside, CA. The siblings shared a passion for music, singing together and teaching one another piano. The family’s strict Mormon faith precluded “listening to anything beyond what was on the radio” though. An outsider since birth, Thea shuffled in and out of middle school, spending seventh grade and eighth grade in home school. In the face of various trouble, trials, and tribulations, she eventually attended five different high schools before dropping out. Simultaneously, she developed a diverse musical palette. After seeing a tattoo of the iconic logo, she researched Black Flag online and unlocked the worlds of punk, hardcore, and goth. Her tastes spanned everything from E.L.O., The Doors, and The Carpenters to Christian Death, Crystal Castles, Rico Nasty, Jinjer, and Lil Peep.

Around the same time, she started doing drugs, falling down a rabbit hole and taking multiple trips to rehab. “The last time I went to rehab, I was there for six months, and I had a guitar. I wrote prolifically all the time. It clicked, ‘This is what I was meant to do’. I told myself I would record and release music when I got home.” She made good on this promise and uploaded “wish I wuz dead” to Soundcloud, gaining traction right out of the gate. She chose the name carolesdaughter in honor of her mom Carole. 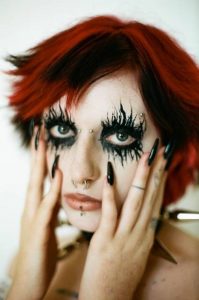