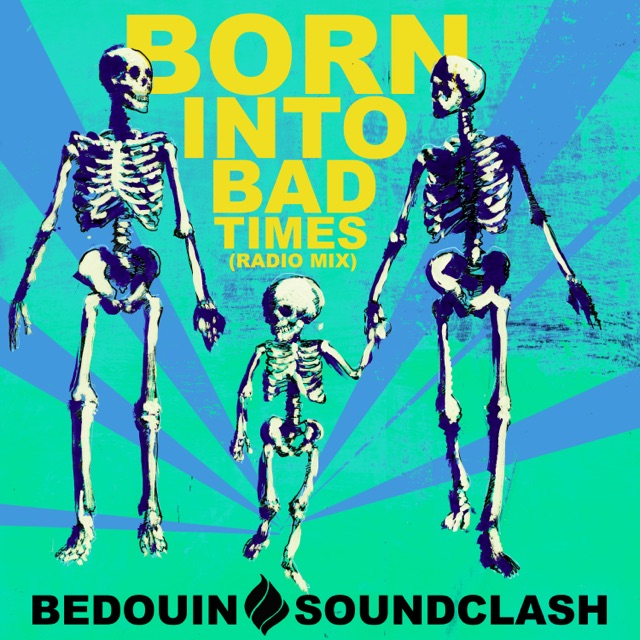 (February 7, 2020) Bedouin Soundclash today release “Born Into Bad Times,” the latest single from the duo’s fifth studio album, MASS, released October 4. 2019.  This release comes as the band embarks on their Canadian tour beginning tonight in Victoria, BC. Crossing the country from west to east, these dates mark the first time the band has toured Canada since 2011 and includes stops in Vancouver, Calgary, London, and Montreal. Post Canadian dates, the band will set out on an extensive tour of the UK.

Canadian rock and reggae royalty, Bedouin Soundclash, took a creative hiatus for nearly a decade after climbing to the pinnacle of the Canadian music industry, and now they’re back to begin the next chapter in their singular genre-defying career – a career which has seen them celebrated at home and abroad with JUNO awards, critical acclaim, and international tours with No Doubt, Ben Harper, The Interrupters, and Thievery Corporation.

The new album, MASS was partially recorded in New Orleans with producer King Britt and the famed Preservation Hall Jazz Band, and features the indelible new single “Born Into Bad Times.” Now the band is out on their first national tour supporting the new album, the new single, and their catalogue of hits (“When The Night Feels My Song,” “Walls Fall Down,” “Brutal Hearts”).

Almost a decade on from the release of their critically acclaimed 2010 album Light The Horizon, lead singer Jay Malinowski and bassist Eon Sinclair have written arguably their most cohesive and all-encompassing album in their eighteen-year history, after a period where it wasn’t clear whether they would record any music together again.

Formed in 2001 and named after Israeli dub artist/producer Badawi’s 1996 release, Bedouin Soundclash is comprised of Jay Malinowski and Eon Sinclair. Their debut album Root Fire (2001) received critical acclaim before sophomore album Sounding a Mosaic (2004) sent the band global, culminating in a series of sold-out shows and festival appearances around the world. The album featured the smash hit single “When The Night Feels My Song,” produced by punk-hardcore royalty Darryl Jenifer of Bad Brains, and the band went on to pick up their first JUNO Award in 2006 for ‘Best New Group,’ along with numerous accolades around Europe.