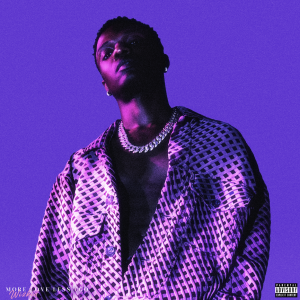 “To see Wizkid perform is to comprehend his prowess as an entertainer.”– Vogue

Watch “Bad To Me” HERE

Recently, Wizkid reached a momentous career milestone as his 2020 Grammy nominated album Made in Lagos, with over a billion streams to its name, was awarded Gold Certified from the RIAA. The album’s 2021 deluxe version had the Justin Bieber remixed lead single “Essence” (featuring Tems) that peaked at #9 on the Billboard Hot 100 chart, won a 2022 BET Award for “Best Collaboration”  and a 2022 NAACP Image Award for “Outstanding International Song,” in addition to being the first Nigerian song to chart on both the Hot 100 and Global 200 charts. The original Grammy nominated version of the single featuring Tems is a 2x Platinum smash hit that reached #1 at Urban Radio and #1 on Billboard’s R&B/Hip-Hop Airplay chart.

Also, this year, Wizkid has collaborated with Chris Brown for his track “Call Me Every Day”, headlined Rolling Loud in Toronto, and performed at festivals around the world including Roots Picnic in Philadelphia, Afro Nation in Portugal, Oh My Fest in Amsterdam, Essence Fest in New Orleans, and more. Wiz is currently up for two nominations – “Favorite Afrobeats Artist” and “Favorite R&B Song” (“Essence” with Tems) for the 2022 American Music Awards.

Grammy award winning singer/songwriter Ayodeji Ibrahim Balogun (aka Wizkid) began his career in music when he was just 11 years old in Lagos, Nigeria. His first record, Lil Prinz, was recorded in 2001 in collaboration with Glorious Five, a group consisting of Balogun and his friends from church. In 2006, he started pursuing music full-time, at first collaborating with various Nigerian pop acts including OJB Jezreel, Naeto C, and Banky W. By 2011, he was ready to record his debut studio album as a solo artist: Superstar was released via Empire Mates Entertainment to great critical and public acclaim across Africa, propelling him to stardom in his home country. After multiple delays and label disagreements, Balogun released his sophomore album titled Ayo in 2014. This second studio album had a multitude of guest appearances, including a spot from Femi Kuti. It also featured Balogun’s global breakthrough track “Ojuelegba.” Not only did the single cement his status as one of Nigeria’s biggest pop acts, it was also picked up and remixed by Drake and Skepta, thrusting Wizkid into the international spotlight. In return, Wizkid appeared on Drake’s 2016 smash single “One Dance.”

In March 2017, it was announced that Wizkid had signed a major deal with RCA and Sony International, which released his third LP, Sounds From the Other Side, later that year. A handful of singles appeared in advance of the album, including “Daddy Yo”, “Sweet Love” and “Come Closer”, and were successful; the latter is certified Gold in the USA and the UK .

Following his impressive international campaign, Wizkid refocused energy on his Starboy imprint in Africa. From releasing viral records like “Soco” with his affiliate acts to securing partnerships with brands such as Puma, Wizkid has solidified himself as a millennial pioneer for African entertainment. As an ode to his hometown, Wizkid released his fourth full-length project titled Made in Lagos in 2020 with guest appearances from Burna Boy, Skepta, Damian Marley, H.E.R, Ella Mai, and more. The album is the highest charting Nigerian album on the Billboard 200 of all time, the longest charting Nigerian album of the century on Billboard World Albums chart, and the first and only African album to be RIAA certified Gold in the US with half a million in sale units. Hit single “Essence” became the first Nigerian song to feature on the Billboard Hot 100 and peak #1 on US urban radio. Made in Lagos, along with his Grammy award winning feature with Beyonce and five sellout shows at the o2 Arena, prove Wizkid’s movement to be one of lasting global impact. 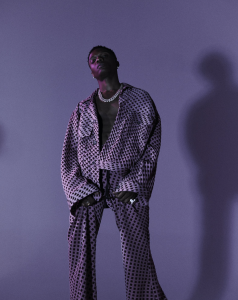