WATCH THE VIDEO FOR LEAD SINGLE “BETTER WITH YOU” HERE 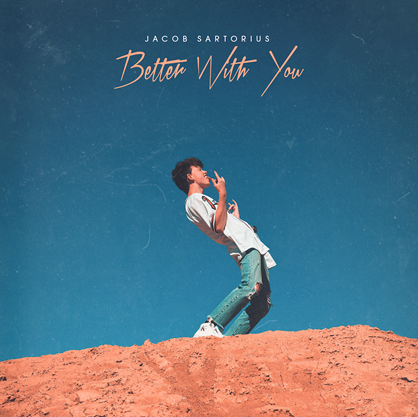 FRIDAY, NOVEMBER 2 (NEW YORK, NY) –  After teasing fans of its release date, including a billboard in Times Square, today 16 year-old singer-songwriter, Jacob Sartorius, has released his latest single “Better With You” alongside a surprise EP by the same name via RCA Records. The emotion packed 7-track EP includes the previously released singles “Hooked on a Feeling” and “Up With It” and 5 never-before-heard tracks. The surprise EP is dedicated to all of Jacob’s fans who have supported him over the years and waited (somewhat) patiently for new music over the past year. Fans can purchase/stream the new project here and watch the video for “Better With You” here.

“This past year has been a crazy emotional rollercoaster ride for me and this project is something that I have been working on through all of it,” Jacob says. “I am so grateful to my fans who have been patiently waiting for new music so being able to surprise them with this EP makes it all worth it.”

The 16 year-old entertainer has seamlessly evolved from online stardom to mainstream ubiquity by following a path of his own. Jacob has been able to garner RIAA status for his singles “Sweatshirt” and “Hit or Miss” – setting the stage for his 2017 releases, The Last Text EP & the Left Me Hangin’ EP. The pop phenom has sold out tour dates across the globe in cities like New York City, Los Angeles, Sydney, Paris and more. Even more, the young star has graced the cover of Billboard Magazine, guested on HBO’s Vice News Now, NPR’s Here and Now and attracted praise from The New York Times, Billboard, Seventeen and many others, in addition to receiving nominations at the People’s Choice Awards, Teen Choice Awards, and Kid’s Choice Awards.

Outside of music, the star has been active in bullying-prevention work. He can be found in the Ad Council’s fall campaign, a PSA with ATTN:, and actively partnering with Be Strong bullying-prevention to share his story, while doing surprise visits at local schools and facetiming with their student ambassadors. Be Strong ambassadors have even attended his shows around the nation!

Be sure to stay on the look-out for more announcements from the young pop phenom – @JacobSartorius.