Legacy Recordings Announces D-Nice Remix Of Teddy Pendergrass Classic “The More I Get, The More I Want” Out Now

LEGACY RECORDINGS ANNOUNCES|D-NICE REMIX OF TEDDY PENDERGRASS CLASSIC
“THE MORE I GET, THE MORE I WANT”

IN CELEBRATION OF THE 50TH ANNIVERSARY OF PHILADELPHIA INTERNATIONAL RECORDS

*VIRTUAL ART GALLERY INSPIRED BY THE SOUND OF PHILADELPHIA 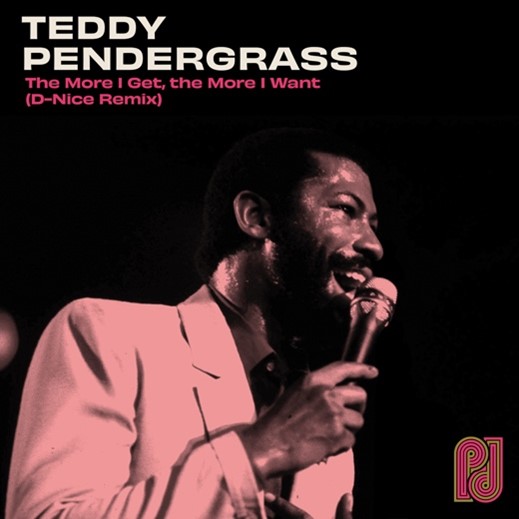 “Five decades after Philadelphia International launched in November 1971 — putting the City of Brotherly Love on the music map with everyone from Harold Melvin & the Blue Notes to Lou Rawls and Patti LaBelle — Gamble and Huff’s legacy endures as one of the most important movements in R&B history.” – Entertainment Weekly

Legacy Recordings, the catalog division of Sony Music Entertainment, is celebrating the official 50th anniversary month of the historic Philadelphia International Records-November-with a stellar new remix of the label’s funk-infused classic Teddy Pendergrass hit “The More I Get, The More I Want” courtesy of the one and only D-Nice! D-Nice, a lifelong fan of the iconic label and its many unforgettable hits penned by the legendary label co-founders Kenny Gamble and Leon Huff, will also treat fans to a special Instagram Live DJ set of PIR classics on Monday,

November 22 – stay tuned to https://www.instagram.com/dnice/ for timing! Fans can get stream the outstanding new take of track here: https://teddypendergrass.lnk.to/MoreIGetDNiceRemixPR

“Teddy Pendergrass, along with Gamble & Huff, made timeless classics that will forever be part of the musical soundscapes to people’s lives,” said D-Nice. “It’s truly an honor to be able to contribute to an important song like ‘The More I Get, The More I Want.’ Congrats to Gamble & Huff on their 50 year anniversary, they are true visionaries.”

Gamble and Huff and their remarkable musical legacy were also feted on November 17 in Harlem with a special evening presented by Toyota Motor North America called “The Soundtrack of Soul,” which will feature exclusive live performances paying tribute to 50 years of incredible music.

Rounding out the November 17 activity, in partnership with Rory Creative, Philadelphia International Records and Legacy Recordings launched “Inspired by The Sound of Philadelphia,” a virtual art gallery featuring unique, original artwork from 10 Philadelphia-based artists who took inspiration from 50 years of musical moments, artists, and songs associated with Philadelphia International Records. The gallery showcases not only the artists and their artwork, but a behind the scenes look at their creative process and how they were inspired by The Sound of Philadelphia. https://PIR.lnk.to/InspiredByWebsitePR