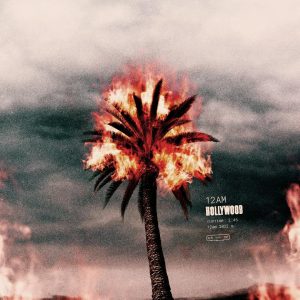 “[12AM] serves up electric energy and surging production” — Wonderland

“12AM has an innate ability to draft big choruses which is why more and more artists are tapping in to use his melodic talents.” — Lyrical Lemonade

“It seems like everyone is trying to glorify the turn up right now; and 12AM definitely does that.” — Hip Hop Canada

Rising artist 12AM has released his new single “Hollywood,” out now via Sony Music Entertainment Canada. The song, co-written and produced by ​​Grammy-nominated producer John Feldmann (Blink 182, Avril Lavigne, Sueco), was inspired by the artist’s return home to Toronto after spending the past few years in Los Angeles. One of his most vulnerable tracks to date, “Hollywood” opens with an acoustic feel and slowly brings listeners into 12AM’s sonic journey of reflection, building into a driving hip-hop beat and an undeniably infectious drum-led drop.

“This is the realest song I have ever written, it’s me being honest about my mental health and the depression that came with living in LA… LA almost killed me,” shares 12AM on the track.

“Hollywood” serves as a follow up to 12AM’s single “Showgirls” featuring Tyla Yaweh and Pressa, which garnered more than 3.1 million combined global streams and over 1.2 million streams on Spotify alone with media praise from the likes of HotNewHipHop, Hollywood Life, Much Music, and 6ixBuzz.

Starting his career in Toronto, Matthew Dubois – who is better known as 12AM – is an emerging rhythmic pop singer stemming from the ever-expanding Canadian music scene. Making waves across his releases, “Hollywood” is the latest in a string of singles since sharing his most recent EP, After Midnight. The record featured notable tracks “Voices” which boasted 7 million streams and “come over” which premiered on Travis Mills’ Apple Music 1 radio show, adding to 12AM’s over 35 million global streams and counting. Earning love from streaming platforms and radio alike, his releases have also landed numerous debuts on New Music Playlists in the US and Canada including Spotify’s coveted New Music Friday as well as their tear drop playlist and Post Malone’s ‘posty’s playlist.’

With more music constantly on the horizon, the future looks incredibly bright and 12AM’s repertoire is only at its inception. Prolific in his dexterity, 12AM is consistently writing for other artists as well as himself.  He can be seen frequently working with Elijah Woods and Omer Fedi (Kid Laroi “Without You, ”24kGoldn & Iann Dior “Mood,” and Lil Nas X “Montero”). Touring accolades include shows with Internet Money, Iann Dior, Jez Dior, 24kGoldn, Jutes, Trevor Daniel, and Souly Had. No stranger to media coverage and acclaim from tastemakers, praise has rolled in from industry key players such as Complex, Elevator Mag, idolator, Lyrical Lemonade, and Noisey. A true musical genius of mixing melodic sounds and prolific storytelling, 12AM is the artist to keep on your radar in 2022. 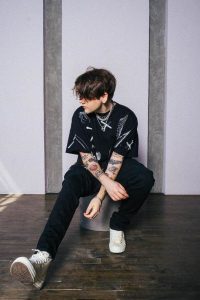 Keep up with 12AM online