12AM RELEASES NEW EP “AFTER MIDNIGHT”

“12AM has an innate ability to draft big choruses which is why more and more artists are tapping in to use his melodic talents.” — LYRICAL LEMONADE

“It seems like everyone is trying to glorify the turn up right now; and 12AM definitely does that.” — HIP HOP CANADA 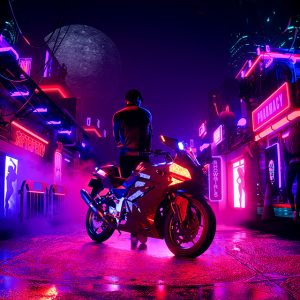 LISTEN to “After Midnight”

LA-by-way-of-Toronto artist 12AM redefines his sound and enters a new era on After Midnight. The EP arrives with the video for new single “Voices” featuring Motown rapper TheHxliday, out now via Sony Music Entertainment Canada.

In the “Voices” video, directed by Logan Meis (Polo G, The Kid Laroi, Trippie Redd, Tyla Yaweh), the viewer is invited into the minds of 12AM and The Hxliday, both fighting against the darkest parts of their psyche and inner turmoil. With their thoughts tearing them apart, symbols of the past make their way in the form of angels, demons, and physical scars. They seem numb to the pain and reach a point where they might just be enjoying it. Each scene gets more and more violent as the story comes to a final climax—watch here.

On his major label debut, the rising act’s pain and passion shine through as he forges a connection with his listeners worldwide. Introducing a bold sound, the lyrics equally shed light on his challenging upbringing and showcase his hard-won elevated lifestyle. Tapping Jutes, Pyrex (Whippa), and TheHxliday for the new project, 12AM continues to add to his impressive list of collaborators which includes 24kGoldn, Iann Dior, Jez Dior, Trevor Daniel, among others. Now sitting on top of over 26 million total streams, he appears on Spotify’s coveted New Music Friday and tear drop playlists, as well as Post Malone’s ‘posty’s playlist’ on the platform.

12AM states, “This music is what I’ve created throughout my time moving to LA from Canada. It’s a new sound and a new lane.All the hardships I’ve gone through over the last few years, I’m surprised I even got to this point because it was a really long road to get to here. It was something that seemed impossible to put together and have it be released, but it’s coming out now and I’m really proud of it.”

The production on After Midnight illustrates stark differences from 12AM’s first album, Afterparty. Working with producers Evan Gartner (Iann Dior, Jutes, MASN) and Mason Sacks (Dominic Fike, Lil Tecca), the new EP has a dark and nocturnal trap palette that lives up to 12AM’s name. He states “it’s the type of music you like to play or listen to after midnight—super happy, energetic, depressed and alone or with somebody getting down…I wanted to embody every feeling you get After Midnight, life is usually the most real at that time.”

After Midnight gives us a deeper look into the world 12AM has navigated and created for himself. His endless hustle, effortless bravado, and all-or-nothing attitude has certainly earned his place in the game. The EP’s opener “Cold Season” sets the scene around 12AM’s life before moving to LA, living in the frigid cold of Canada with an inescapable feeling of isolation. For most of his life he was responsible for taking care of his sick mother, until he tragically lost her in his teens. “If I could see my momma one more time I’d tell her that I’m all good,” he sings on the track, “I’d be lying but it’s all good…” At a young age, he struggled to financially support himself alone and eventually faced homelessness. Hit with these insurmountable burdens, he bottled up his emotions and channeled what he could in his writing. “Voices” paints a picture of the aftermath, torn emotions and a heavy guard up due to inner child wounds. The lyrics describe the fallout of heartbreak, one day having the support of a loved one and left for dead the next. With distant distorted and melancholic piano strings, TheHxliday joins in seamlessly on the back half of the track with a striking feature that matches 12AM’s energy. Paired with a booming 808 and stuttering high hats, alongside the duo’s unmatched flow, the song explodes into an anthem about love and loss. The EP isn’t all moody bangers though—“come over” is a playful, sultry groove with a “Netflix & Chill” kind of vibe that garnered success on TikTok over the summer, including a post from influencer Sommer Ray who joined in on the dance trend. Other tracks on the EP include “Lights” featuring Pyrex (Whippa) and “Ski Mask.”

With more music on the horizon, the future looks incredibly bright and 12AM’s repertoire is only at its inception. Prolific in his dexterity, 12AM is consistently writing for other artists as well as himself.  He can be seen frequently working with Elijah Woods and Omer Fedi (Kid Laroi “Without You, ”24kGoldn & Iann Dior “Mood,” and Lil Nas X “Montero”). Touring accolades include shows with Internet Money, Iann Dior, Jez Dior, 24kGoldn, Jutes, Trevor Daniel, and Souly Had. No stranger to media coverage and acclaim from tastemakers, praise has rolled in from industry key players such as Complex, Elevator Mag, idolator, Lyrical Lemonade, and Noisey.

Reflecting on his work, 12AM says, “My main focus is just to help people. That’s why I make music. When I get messages from fans saying I’ve helped them through depression or whatever they are going through it means the world to me, I can’t really believe it. That’s what I do this for.  Whenever I play a show and fans are singing the lyrics back and when they meet me after the show I just want to have a positive impact and be there for them, because they are all that matters in this music industry.”

Keep up with 12AM online: