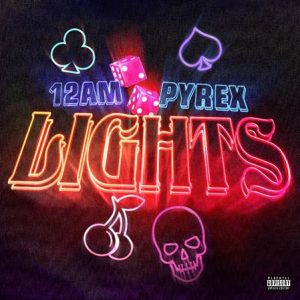 Following immediate success with previous singles, “come over” and “Ski Mask,” 12AM teams up with the Baltimore producer and rapper, Pyrex, to release the laidback, head-nodding track “Lights” for those late summer nights. Listen HERE

“Lights,” produced by Evan Gartner / Mason Sacks showcases 12AM’s signature melodic R&B style. 12AM emotionally illustrates through lyrics his challenging upbringing and how he has become the artist he is today. He also narrates an L.A. lifestyle by referencing extravagant parties, unique fashion trends and door-opening opportunities that have completely transformed his life.

A prolific storyteller, 12AM consistently writes for other artists as well as himself. 12AM can be seen frequently working with Elijah Woods and Omer Fedi (Kid Laroi “Without You”), (24kGoldn & Iann Dior “Mood”) & (Lil Nas X “Montero”) also regularly working with producers Midi Jones, Bizness Boi, and NGHT NGHT. Apart from writing and making music 12AMhas an extensive touring background, in his most recent run touring North America with Souly, 12AM completed over 30 show dates on a single tour amassing sold out venues in Salt Lake City and Toronto. Touring accolades include dates with Internet Money, Iann Dior, Jez Dior, 24kGoldn, Jutes, and Trevor Daniel. A one-of-a-kind artist, 12AM’s passion and pain shine through his music-making and unique story telling ability.