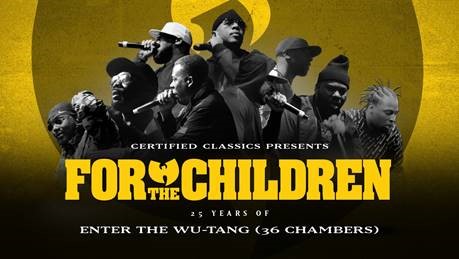 (New York, NY – November 9, 2018) Certified Classics celebrates the 25th Anniversary of Enter the Wu-Tang (36 Chambers) with the release of For The Children: 25 Years of Enter The Wu-Tang (36 Chambers) short film today. The short film celebrates the music of the album as it turns 25 years old. Through the words of the members of Wu-Tang, they recount the founding principles that brought them together as a group, the struggles of growing up and how this fueled their lyrical content, the production of key songs and the lasting impact of the album. Click HERE to view.

The film features fan accounts from A$AP Rocky, A$AP Ferg, Gary Vaynerchuck, Joey Bada$$, and Young Dirty Bastard (Ol’ Dirty Bastard’s first-born son). They talk about how 36 Chambers and Wu-Tang have been a source of inspiration and YDB talks about being born into Wu.

As previously announced, Certified Classic’s will also release a limited run of Wu-Tang Clan’s iconic third single “C.R.E.A.M.” as a special Die-Cut 10” Picture Disc in the shape of the legendary Wu-Tang Logo. The re-issue vinyl is backed with the single’s original B-side “The Mystery of Chessboxin” which will be available on December 14th at https://certified.lnk.to/WuTang25/ArtistStore. As well as an exclusive “36 Chambers” t-shirt in partnership with Live Nation (Wu-Tang’s official merch company) to commemorate this milestone album anniversary.

Check out the bundles at https://certified.lnk.to/WuTang25/ArtistStore

25 years later, Wu-Tang’s Enter the Wu-Tang (36 Chambers) is timeless, the greatest honor an album can accomplish, earned only by aging without a wrinkle.

With their 1993 debut album, which has just been re-certified 3X Platinum with the RIAA, the nine-man clan created a rich, innovative labyrinth to explore and created the benchmark of culture-defining greatness. Sonically and lyrically the body of work is a neck-breaking rush through the raw cracks and crevices of every room and chamber. Wu-Tang cemented their names, lyrics, sound, and symbol in the unforeseen tomorrow by making what wasn’t in their present. By doing so, they gave hip-hop one of her greatest gifts to be passed down by the generations.

Certified Classics is Legacy Recordings’ division for the celebration of Sony Music’s Hip-Hop and R&B catalog. With artists like The Fugees, Maxwell, Nas, A Tribe Quest, Xscape, Aaliyah and many more, Certified pays homage to the legendary innovators of Hip-Hop and R&B by preserving, curating and reissuing repertoire from the 1980s through the early 2000s.

Launched in 2016, Certified creates opportunities to discuss, revisit, and renew interest in a genre that shaped an entire culture, making the leap from a grassroots form of expression to a mainstream juggernaut with staying power. Certified provides contemporary music fans access to rare and unreleased albums, singles, remixes, photos and video footage from iconic labels that have come through the Sony label system such as Jive, Loud, Ruffhouse, J Records, Arista, LaFace, So So Def, Profile, RCA Records, Epic, and Columbia—all in an effort to tell stories that help illustrate the impact R&B and Hip-Hop have made on music and the world.

About Wu-Tang Clan
Twenty-five years ago, the Wu-Tang Clan changed hip-hop music forever. Bursting onto the music scene with the release of Enter the Wu-Tang (36 Chambers), the group quickly became recognized for its innovative beats and clever lyrics, as well as the diverse personalities and talents that make up its nine-member hip-hop group. The Wu-Tang Clan has released seven gold and platinum studio albums with worldwide sales of more than 40 million albums. With lyrics that combine the reality of 1990s New York and the world of martial arts, the Wu-Tang Clan has created a unique mythology that captures the hearts of fans worldwide.